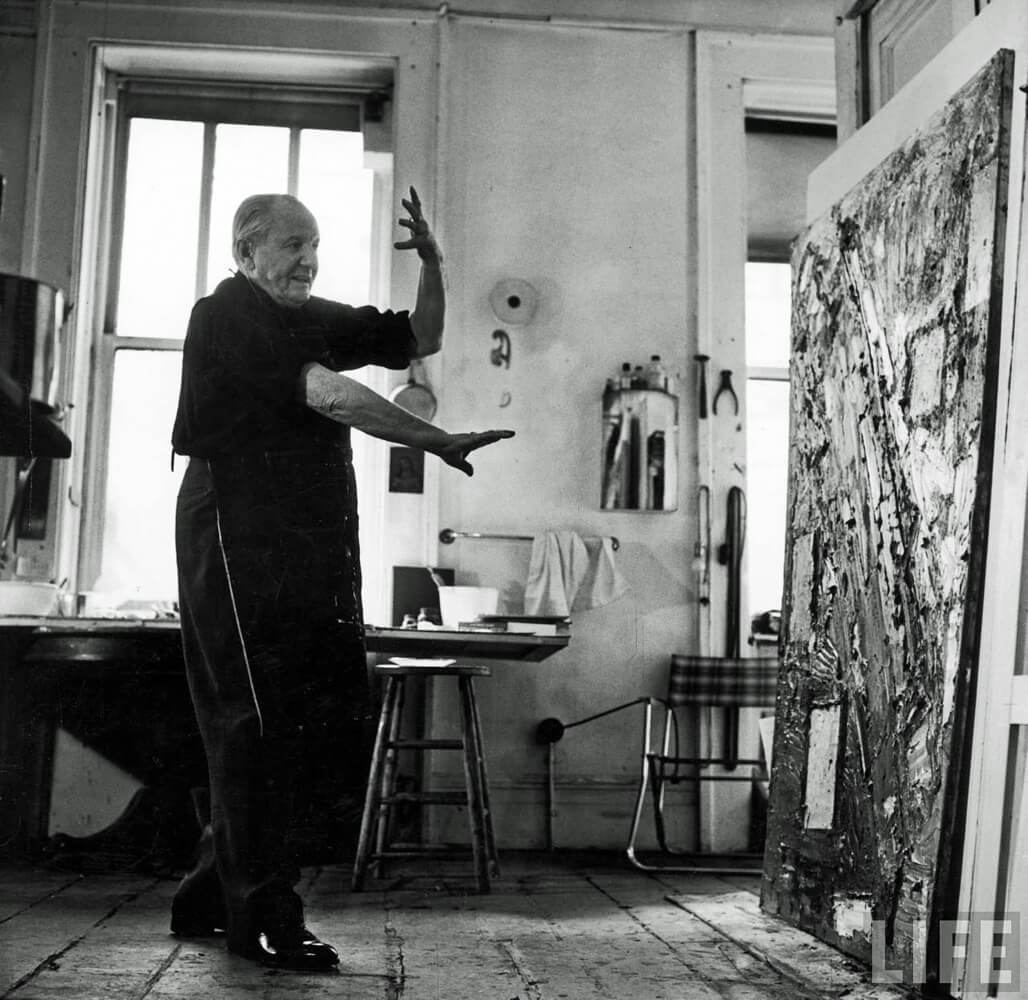 Hans Hofmann in his studio

The course of art history has been shaped by seminal figures who link different eras, cultures and styles. When Hans Hofmann (1880–1966) immigrated to the United States in 1933 he became a living bridge between European Cubism and American Abstract Expressionism, having already been a pivotal figure between French Fauvism and German Expressionism. His first exhibition in Berlin included works by Edvard Munch and Paul Cézanne, and in Paris he was a classmate of Henri Matisse. His private academies in New York and Provincetown offered a completely original approach to the relationship between color and form. The varying intensity (chroma) of powerful color areas (in his paintings, the example of red and green are most vivid) are dynamic—he taught his students to think of their “speed in depth penetration.” The black lines of his works on paper, and the life drawings of his students, are guides to the “development” (another favorite term” of the compositions.

Hofmann’s celebrated classes attracted many of the most talented young artists of the Abstract Expressionist generation, including Lee Krasner, Helen Frankenthaler, John Schueler, Wolf Kahn and Fritz Bultman.  The exhilarating motion of Hofmann’s gestures became their license to a new freedom in painterly expression, and many of them shared his rejection of the negative, recessionary space in favor of a “positive” space, crowded with mass and detail.

Hofmann had a particularly close bond with his German-speaking students, Kahn and Bultman. While the latter’s collages are a stunning reminder of the connection to Matisse, Kahn’s vibrant tones attest to Hofmann’s precept: “Color has the faculty to create volume and luminosity.” Bultman’s confident figure drawing attests to the importance Hofmann placed on the life class, while Schueler’s densely built surface and the fluid regions of color in the work of Frankenthaler and Krasner offer new levels of bravura painting techniques inspired by the master. Hofmann the teacher is best known for the expression (referring to the powers of color rather than to the directions of gesture): “Push answers with pull and pull with push.” As he bridged line and color, Europe and America, he pushed his students to a level of expressive intensity even as they pulled him to sublime essays in “color-form.”