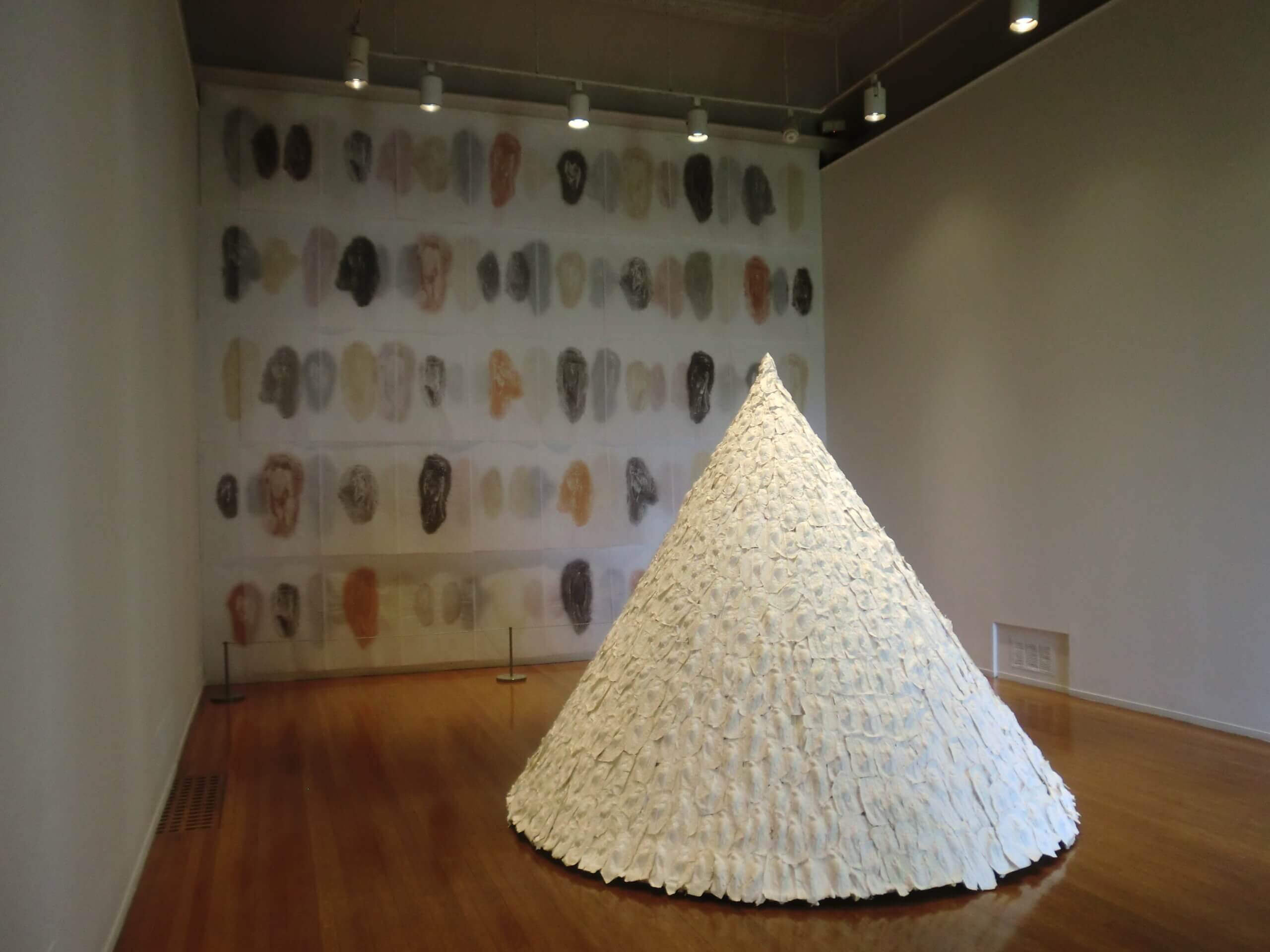 Rimer Cardillo, Birds of Clay, Oil, and Ashes Cupí. This sculpted installation measures 6′ 7″ high by 9′ 10″ wide, and is made of embossed handmade paper woven between threads, and multiple hand-painted photo-screens printed with oil, clay, and ashes on paper.

A prominent Uruguayan American artist living and working in New York City and the Hudson River Valley, Rimer Cardillo has developed a significant body of work that includes prints, photography, sculpture and installations. He creates major site-specific pieces that he refers to as cupí (from the native Guarani word for anthill), as well as photo and film-based documentary work related to his collaborations with scholars and practitioners in the fields of entomology and archaeology. Drawing his influences from the landscape and environment of both his native Uruguay and of the Hudson Valley area, Cardillo’s work often reflects his concern over the demise of native people, plants, and animals around the world. He is also noted for his journalistic explorations of the Amazonian interior, rural estancias of northern Uruguay and southern Paraguay, and other remote regions of the South American continent.

Rimer Cardillo: Journadas del la Memoria will be highlighted by a full-gallery cupí installation called Birds of Clay, Oil, and Ashes Cupí. This sculpted installation measures 6′ 7″ high by 9′ 10″ wide, and is made of embossed handmade paper woven between threads, and multiple hand-painted photo-screens printed with oil, clay, and ashes on paper. Other works in the exhibition feature images cimarrones and criollos (wild dogs and native horses of Uruguay) on digital photographs.

Writing about Cardillo for a retrospective at The Samuel Dorsky Museum at SUNY-New Paltz, Nassau County Museum of Art Director Dr. Karl E. Willers notes: “As an artist of Uruguayan descent living in the United States since the late 1970s, Rimer Cardillo has explored disparate cultures and negotiated socio-political differences through an artistic practice rooted in printmaking but spanning a range of creative media.” Dr. Willers emphasizes that Cardillo’s work “cannot be separated from his social commitment to the preservation of indigenous cultures, the protection of endangered species, and the preservation of vulnerable environments.”